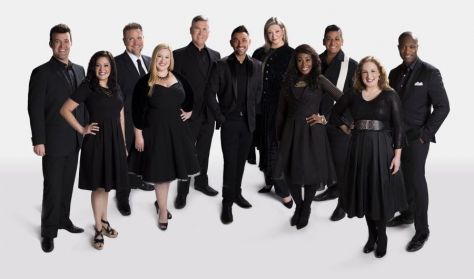 Best known for its Disney medleys, showtunes and Christmas songs — watched by more than 150 million on YouTube — Orlando-based Voctave is an a cappella ensemble, meaning the 11 members sing unaccompanied. Formed in 2015 by producer and arranger Jamey Ray, the voices that that bring their artistic arrangements to life represent a wealth of diverse backgrounds and musical experiences. The group has performed with Grammy, Dove and American Music Award winners. With multiple #1 songs and albums on iTunes, Amazon and Spotify, Voctave has also ranked in the top 25 on Billboard Magazine’s charts.

Free Parking will not be available at the Lewis Auditorium of Flagler College for this concert season. Free Parking will take place at the St. Johns County Council on Aging, 180 Marine St., St. Augustine FL 32084. Guests will then be transported to and from the concert venue by shuttle service free of charge. We hope you will take advantage of this new hassle free parking arrangement. This feature is included in the stated concert ticket price.