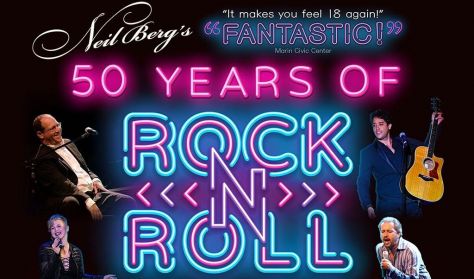 With a cast consisting of both stars from Broadway’s greatest rock musicals, as well as incredible Rock & Roll singers, Neil Berg shares the often unknown stories from the fifty-year history of the music that changed the world forever!

Neil Berg is the composer/co-lyricist of award-winning new rock musical THE 12, written with Pulitzer Prize/Tony-winning playwright, Robert Schenkkan, which premiered at the Denver Center. His other shows include the new Broadway-bound musical Grumpy Old Men, which opened to rave reviews for its U.S. Premiere at The Ogunquit Playhouse in Maine, the hit Off-Broadway musical The Prince and the Pauper, Tim and Scrooge, which ran at the Westchester Broadway Theatre in NY, and The Man Who Would Be King. Neil is the creator/co-producer of the #1 Broadway touring concert in America, Neil Berg’s 100 Years of Broadway, as well as Neil Berg’s 50 Years of Rock & Roll and Neil Berg’s Pianomen. He is the co-producer of the Off-Broadway Alliance Award-Winning revival of Closer Than Ever. www.neilberg.com

Warning! The basket time limit is about to expire!